Not waiting for rain - adapting to climate change in Cambodia 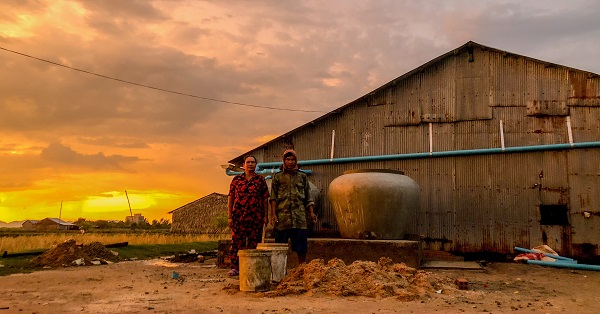 It is unsurprising to hear how recent extreme and unpredictable weather changes are negatively impacting the lives of Cambodians. Half of the country’s labour force work in agriculture and 75% of the population live in rural areas reliant on farming and fishing to make a living.

A Sida funded nation-wide survey conducted by BBC Media Action looking at Cambodians’ lived experience of climate change found 81% of respondents felt such changes had damaged their income, with half of those surveyed remarking on the decrease in agricultural production over the last decade and three quarters believing fish numbers have declined.  85% of people also felt the weather changes were harming their health.

This research and accompanying media and outreach outputs entitled the Neighbours Together project was aimed at helping vulnerable Cambodians adapt their lives and livelihoods to cope with the increasing severity of weather events through raising awareness of climate change risks; encouraging discussion and supporting the adoption of new practices.

Curing a confidence complex with community

According to the findings, most respondents believed there should be more support by government and NGOs, with others feeling ill-equipped to respond due to lack of resources or relevant information, and some feeling reluctant to try anything new. Interestingly, when action was being taken, it was often on a large scale - a third of Cambodians were more likely to make big life changes such as changing their job as opposed to taking simpler methods in order to deal with weather changes.

Hayman points out that institutional investments and NGO initiatives exist, and people may be looking to others to address the issue of climate change because of a lack of knowledge and confidence to take action themselves.

In spite of this, 93% of respondents stated they were confident that communities could work together to tackle problems and prepare for the future. Hayman asserts how the project fundamentally believed this strong sense of community in Cambodia “could be leveraged through communication to increase collective action, encourage local conversation, and build networks to share information.”

These key insights from the research consequently inspired digital output, community events,capacity building, and a twelve-episode national TV series called Don’t Wait for Rain which aired nationally on CTN and MyTV between February and May this year.

The programme provided simple, replicable techniques for people to adopt back home to help them adapt to the effects of extreme weather, such as drought, flooding, increased prevalence of pests and lightning whilst also exploring some of the reasons that may prevent people from planning for such weather in the first place. It demonstrated people were not taking measures to adapt to weather changes as they believed it would cost money for instance, so emphasised the accessibility and affordability of solutions.

Hayman remarks on the need for trust and relatability in communication outputs, as 37% of respondents reported they were fearful of  discussing actions with others and 42% said they didn’t know anyone taking action It was therefore important for the TV shows to bring model contributors – or “people like me” -  together to talk about solutions to the effects of extreme weather. “Coupling a storytelling approach with practical solutions worked well as audiences felt it was unlike anything else on TV and they were able to learn new techniques and share with others,” she says.

Explaining things simply and demonstrating how people could use materials they could easily find in their community enabled them to take ownership and control.

The TV show, which won “Best TV Feature on Climate Change” Category of the 4th ABU Media Awards on Climate Change and Disaster Risk Reduction, has been well received, with audiences finding the programme to be unique, educational and inspiring.  Hayman emphasises the need for a Don’t Wait for Rain format into a second series, including a “what happened next?” segment as audiences expressed a desire to see the journey to success, not possible within the time and funding constraints of the first phase of the project. She believes, “this would help to build the trust that audiences have already shown in the programme.”

Meanwhile, more community screenings for those who do not have access to a TV could help to maximise the programme. Hayman adds they are also seeking to further build capacity amongst practitioners to help with their own community strategies.

The project brought to light that Cambodians are aware of the issues - 85% had heard of the term climate change and 78% of people feel informed about how to adapt to changes in the weather and environment but gaps in actual understanding persist – only 42% understand what the term climate change means. The report states, “encouragingly, there is an appetite among Cambodians to adapt to the changes in the weather and environment they are experiencing”. In Khmer, the expression “don’t wait for rain” means you are sitting around waiting for something to happen. Positively many Cambodians given the resources, information, and community support, seem ready to take action.